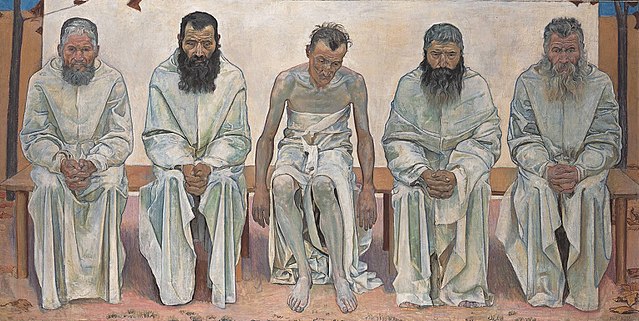 Chronic stress is an etiological factor supporting the induction of depressive symptoms. How does exposure to stress affects the brain and how to remedy it are important questions for the development of novel and effective therapies.

In the Netherlands, depression affects 8% of the population, and in extreme cases is associated with the ~1800 yearly suicides. Current anti-depressants are slow to act and will fail to work in a sizable population of treatment-resistant patients.

We have examined the brain-wide remodelling within and between distributed neuronal networks in a mouse model of psychosocial stress. The patterns observed in chronically stressed animals closely resembled those found in human patients using homologous methods, however, the underlying biological mechanisms behind this phenotype is not understood.

To causally evaluate the role of serotonin, a major neurotransmitter implicated in depression, we have leveraged a method to visualize whole-brain activity in response to serotonin release. We found that stressed animals had a reduced response to serotonin release, whereas animals receiving serotonin-reuptake inhibitors had the opposite response. We seek to implement this method to further our understanding of neuronal remodelling under acute and chronic stress, and to understand the role of serotonin in a variety of cognitive tasks. 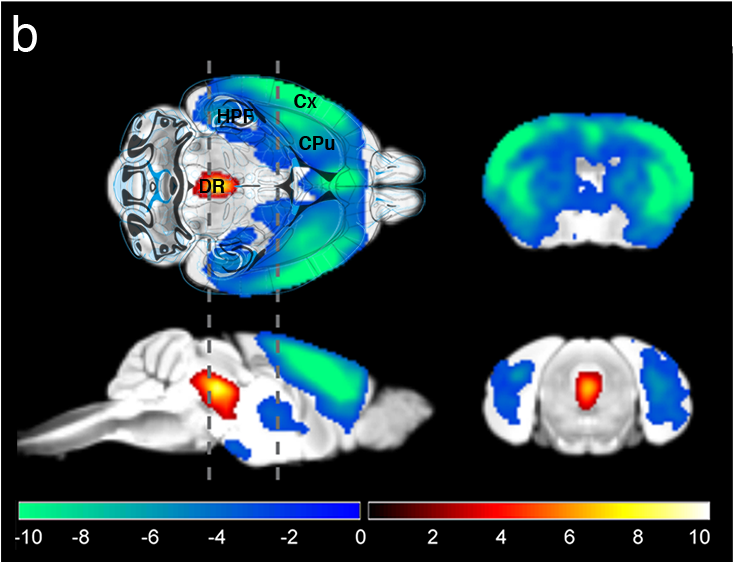 Figure | Visualization of the serotonin system with fMRI and optogenetics

Serotonin-reuptake inhibitors are slow to act, and often fail to work altogether. Psilocybin, an agent derived from ‘magic mushroom’, is considered to exert rapid and potent anti-depressive properties. To better understand its role, we administered psilocybin in healthy mice during whole-brain recordings. We found that psilocybin acts on neuronal networks that were not identified in animals under-going chronic stress. The effect of psilocybin was found nearly exclusively in the ventral striatum, an area associated with reward and dopamine. This observation reconciles some of the conflicting findings in human, but suggest a mechanism for Psilocybin mode of action.

The early mechanisms leading to functional alterations in Alzheimer’s disease

Neurodegenerative disorders exert a huge toll on our ageing populations. The dramatic decline in cognitive function is distressing for both the patients and the families witnessing the disease.

No disease-modifying treatment exists for the disease. Moreover, beyond a genetic (e.g. APOE4 allele) and environmental (e.g. cardio-vascular) risk factors, the steps leading to the pathology remain elusive.

Using animal models and neuroimaging, we investigate the earlier stages of the pathology and its relation to brain structure and function. 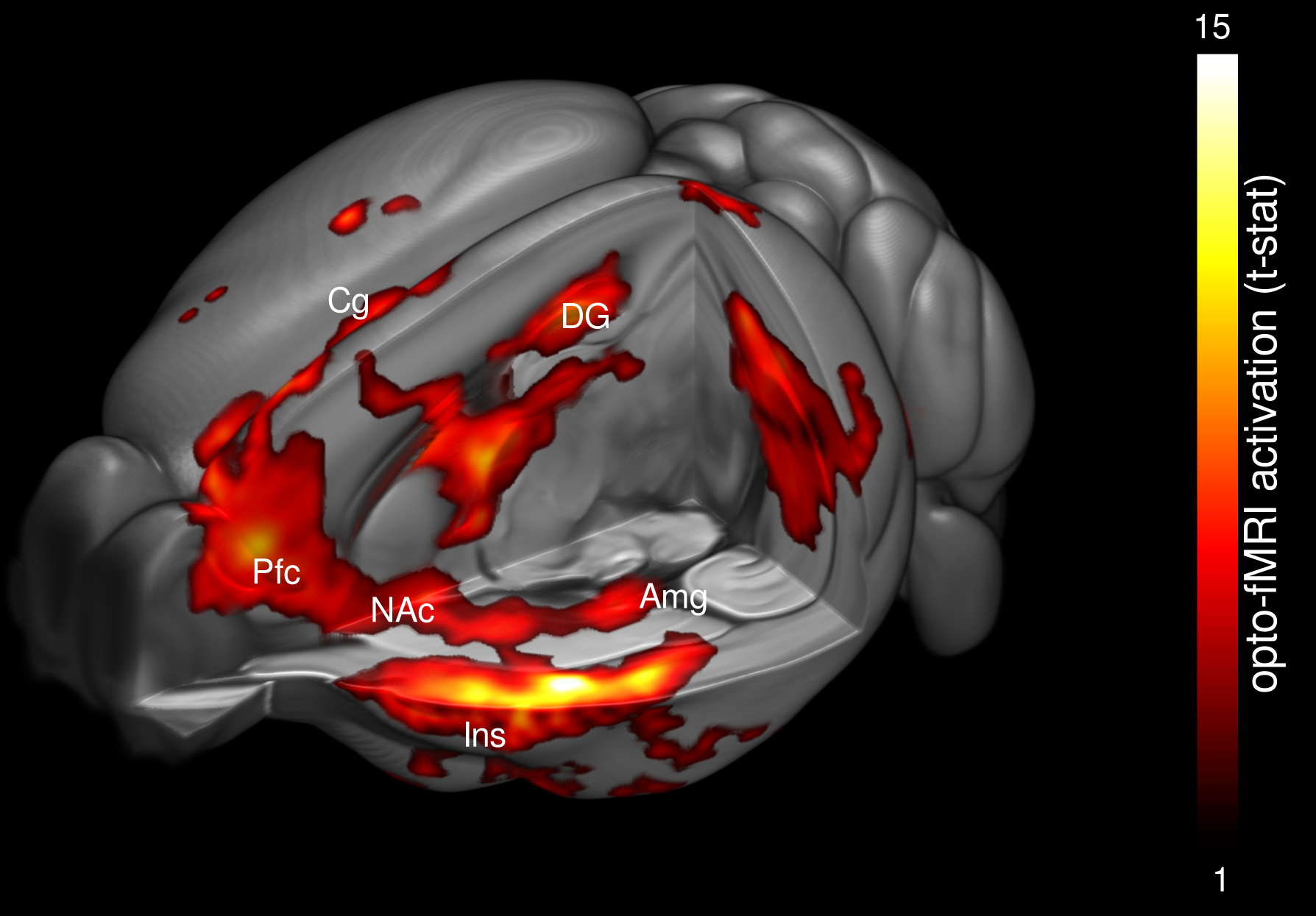 Using optogenetics and functional imaging, we have characterized a dichotomy between resting and evoked neuronal activation in the entorhinal cortex, a region strongly affected in Alzheimer’s disease.

Figure | A comparison of structural and functional connectivity

Figure | A mutli-center assesment of the mouse default mode network

Science is a continually evolving system. Animal neuroimaging has developed rapidly over the past 10 years, fueled in part to functional imaging possibilities. We have been involved since the beginning in providing resources to help new groups implement the methods. Since 2014 we have made all of our dataset freely available online (see resources).

We have spearheaded the first animal fMRI multi-centre comparison study, and we now continue to provide resources to foster the development of animal fMRI. I am happy to review dataset from labs seeking to implement animal fMRI technologies.